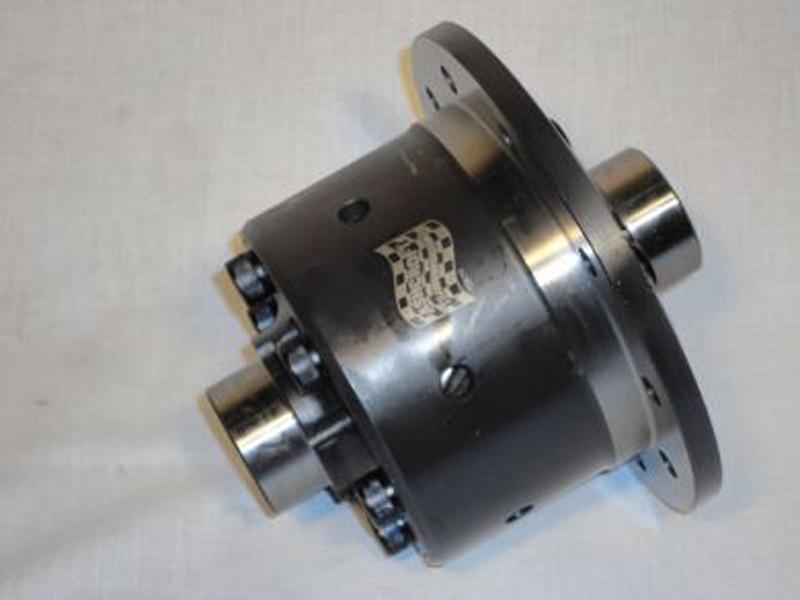 We are pleased to announce the addition to our range of Diff Centres.

The key features are: -

The ATB, our latest addition, is a 'Helical Gear' type LSD with six gear pockets.

There are a number of other LSD available including the 'plate type' and the Torsen T1, we believe the ATB is superior to the Plate type LSD principally because of the high preload necessary to make the plate type effective, this high pre load leads to 'harshness and vibration effects' and causes high premature wear. The Torsen T1 was the forerunner ATB and relied on a different principle to generate cross torque, effectively using coupled worm and wheel gears, being driven backwards, to create the necessary friction loads. These often failed due to this high loading destroying the worm gears.

The helical gear type ATB has many advantages that overcome the objections to other designs. There is a minimal pre-load necessary to engage the gears but this does not cause excessive wear or harshness, the helical gear type is virtually invisible to the driver on normal road use as the gear/pocket friction simply does not occur.
So how does this 'helical gear' ATB work, as stated earlier there are six sets of helical gears, mounted parallel to the axle, each side 'sun' gear drives six helical gears, these mesh with six corresponding helical gears which in turn drive the opposite side 'sun' gear. The important factor is the fact that these helical gears are mounted in 'pockets' in the center carrier, so any radial load on the helical gears causes them the press against the side of the pocket creating friction. This is why we use six pockets as opposed to three in another well known brand, more pockets more friction and better ATB effect.

One of the drawbacks of the ATB is that it is always necessary to have some load on one wheel per axle. if there a no load situation eg cross axle the wheel with traction would only see approx three times the load on the wheel with no traction ie nothing!!. To overcome this, as stated earlier, the ATB is fitted with some preload springs to provide some loading to the side with no traction in the event of a cross axle, where this pre-load is not providing sufficient traction to the other side then one favourite trick is to apply a small amount of left foot brake whilst applying more throttle. This manouver fools the diff by providing load to the non-traction side which is multiplied by the ATB (approx 3:1) to the other side, the loss of drive attributed to the brakes which are acting equally on both wheels is overcome by the additional throttle. In a car fitted with Automatic Traction Control this braking all takes effect automatically and the ATB provides additional traction by multiplying the ATC effect.

So why use an ATB instead of a locker?? basically when driving on a low traction surface. for example sand, snow, or even wet grass rather than have a locked diff which can 'cause' loss of traction for example when cornering as both wheel are forced to travel at the same speed, one wheel typically breaks traction allowing all the drive to the other wheel which will also break traction. the ATB will allow wheel speed difference but at the same time will always try to equalise the torque to each wheel, this reduces the possibility of a spin out situation.